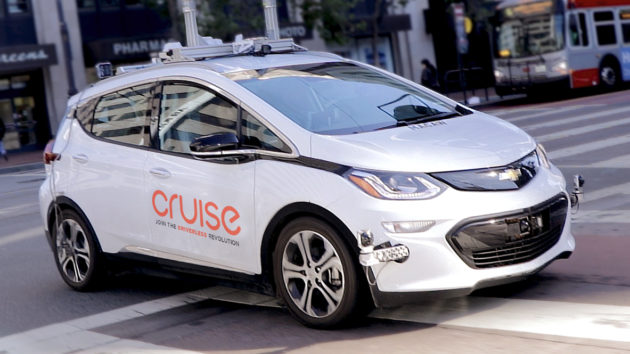 Pretty much every car manufacturer on the planet are testing their autonomous cars here in Silicon Valley. Resources are plentiful, rules and regulations, as innovation friendly as possible without going overboard. And again the accumulation of knowledge is unparalleled. We spoke with a few test drivers and physically sensed the excitement, the community and the open exchange. The learn every 24 hours new things. Then share and compare in Silicon Valley style open and freely and learn 50 times as much from all the others. Knowledge aggregation and rapid execution has always given the Bay Area its technological edge. And since the workplace of these ever driving software developers, analysts and testers is not in a coworking space, they meet at parking lots of super markets to share and compare.

The epicenter of innovation is – and probably remains for a long time – Silicon Valley and San Francisco. Rules and regulations on one side and lack of courage on the other side prevents true innovation in the rest of the world – maybe except China.

What do they actually test?

We ask them what the do and they told us that they simply analyze every move the cars are doing in any situation and constantly optimize their algorithms and sensor usage and so forth. The terrain is great and the environment perfect. These tests happen in a culture of innovation where the large part of the public is innovation friendly.

Day in and day out they roam the city with ever new tests and updates from previous tests. We were asked not share photos but found it OK to post about it. Each of the cars, no matter what brand is manned with 4 people multiple computers each, mounted screen on the back seat and one of the seat next to the driver. The driver is simply focused on taking care that in every situation the car is under human control. We jokingly asked if they don’t trust them yet? One said: “the only device we do not really trust is the human driver” – huge laughter. The main reason for running these tests under human control is that the driver is sensing tiny anomalies to human driving style in either situation: the advanced precision and superiority of the machine and the reaction to unknown situations and the reaction even if the computer would not have an answer. Very much like a human. If all of a sudden in the middle of the Market street an elephant would fall from the sky, we are not trained to that situation but we stop the car immediately. And that is what the machines is conditioned to do as well.

Obviously nobody shared any – not even personal – views of when the car industry, the policy makers and the public would be ready for autonomous cars. Yet it was not hard to guess it would not be any soon – but it would also not take two decades.

We asked one team from a European brand, why San Francisco? A point blank answer: “Where else could we go. In the past 30 years we have always the same cycle: Europeans want innovation, but it must be in harmony with the existing business and we allow the existing industry to fight it with lawsuits. AirBnB, Uber, Tesla, Google, Amazon all the major disruptors have a hard time in the old world – they want to wait and see and if they can’t stop it anymore. It’s really sad.”

In any case 500 cars, 3 engineers each car, that is 1,500 AI developer, analysts and testers plus the people in the offices and labs, making Silicon Valley again, the world’s number one hot spot in next generation automotive technology.

Let’s see what else we discover in the next few weeks.

Who should build the MVP