I see thousands of horror stories and get hundreds of fearful questions like will AI be harmful to humans, will “they” take over the world. People see them already as fully developed beings and thousands of times superior over humans. There is an interesting psychological analysis about that – but first let me stop this absurd craziness.

WHAT IS ARTIFICIAL INTELLIGENCE?

First and foremost AI is a piece of software. It is typically written in very well known and for decades widely used programming languages such as C, C++ or Python. To make the software do what is smarter than just “if this happens then do that” software developer are using smart algorithms – mathematics. Another technique that is used is so called “Neural Networks” – but also that is pure software. The neural networks is a mechanism that is seen in our brain handling all kinds of filtering, sorting and decision providing mechanisms. So all in all, AI is software, math and libraries of techniques.

Instead of keyboard and mouse, so called “Natural language Processing” tools or in layman’s terms: speech recognition tools are used.  So we can talk to the computer and it will talk back by using speech synthesiser. And since we are used to use web cams, electric thermometers, GPS and stuff, we can attach these to the computer as well.

Now the combination of computer, software and all kind of sensors, the “machine” looks much smarter than before. But hey, it is still a machine, doing what the software we wrote, is dictating it to do.

Another thing, which started the avalanche of hysteria and craziness, is the idea that in the combination of smart algorithms and neural networks, we can actually program the machine to “learn”. The only magic in this is that we humans have an enormous respect for “learning”. The machine however learns VERY differently than we. Give the machine 100,000 images of dogs and it will learn how a dog looks like. If we now add a dog in 100,000 other pictures where also cats and other animals are in, the likelyhood to recognize the pattern of a dog is pretty high. In contrast to a human, my daughter took about 20 to 30 impressions of a dog to “learn” what a dog is. She also learned that a cat is a similar animal but not quite the same.

Why is AI such a big deal

Well, you could give an AI system the construction plan of a car. Then ask it to create an optimal body, that is as light as possible, as stiff as possible, has a dynamic material behavior in case of a crash and considerable ,ess expensive.
The AI system could instead of only 100,000 views take 10 Million iterations of each component and come back with a design where the car is only 100 KG instead of one ton, has a network style body instead of full material and using all kinds of stiffness measures that it is stronger and at the same time lighter. With less material and for instance only steel at certain point, carbon in others and so forth it would eventually cost 50%, weighs only one 10th and is much safer. Artificial INtelligence can be programmed to do things like that basically anywhere. Making enormously precise Weather Forecasts, analyze stock exchange behavior of thousands of companies over the past 100 years and  the behavior of investors by the minute to predict much better value development. It can help analyze illness, make more accurate and more neutral decisions as a judge and so forth.

Well – AI is still in development. Approximately 1 million engineers in approximately 100 countries work independently on all kinds of solutions. Mathematicians join the software developers and vice versa. However it is by far not as easy as many people think. The most advanced development right now is autonomous cars. Invented originally in Germany in 1992, where the first autonomous car drove 2,000 KM from southern Germany to Scandinavia and back, all in autonomous mode. Autonomous cars may then take 20 years to get all the kinks out and be safe enough to get on the road. Politicians go back and forth whether they should support it or not, the public is in hysteria to say the least and there is a lot of uncertainty about how AI could be turned into weapons.

What risk remains with AI?

Let’s assume for a moment, we would not have automobiles today. Now somebody would come and suggest we build cars and street, but also need to take in consideration that every year more than one million people will get killed and 20 – 50 million insured. Would we allow that anybody is building those killer machines? Never ever I guess. But the CAR is not the killer it is the human that drives the car. Like in all other ares, the human that uses the gun, the human that uses the knife, the human that drives the tank. Yes, AI and Robots could be build to go to war, kill the opposing country and possibly wipe out a nation. But it is not the robot that magically makes that decision – it is the human that designs it. And as seen in 1945 in Hiroshima, we could do that already in the last century.

On the other hand, we have 340 Million occupational deadly accidents a year. How about accelerating the AI and robotics development to get machines into those jobs and safe 340 Million humans each year. This is more than people dying at wars and accidents all together.

Yes, there are risks that ill-minded people take this technology as a weapon against others. We saw this with Social Media, the Internet, any type of technology in the past.  and we need to do everything to prevent them. But those machines build from plastic, silicon and metal will not magically turn into living things with a purpose we didn’t program and wipe out all humans or stuff like that. Those visions – even coming from people like Steven Hawkins – are based in a huge deficiency of understanding what humans really are and that our “intelligence” is not more and not less to our brain, than  the muscles are to our body. Today we can lift thousands of times more with our cranes than with our muscles. Soon we will be able to think through constructions or algorithms thousand times more complex than we can calculate with our brain. But one thing have cranes and AI in common: Humans have developed them and have the interest and responsibility to make them as safe as any way possible.

Autonomous Machines, driven by Artificial Intelligence, are no living beings with a purpose to kill us. They are machines with a purpose WE GIVE THEM. And if that purpose is killing, then it is still us who made it that way. It is not something THEY CAN DO unless we allow it to go that way.

Why today’s human minds are incapable to outperform AI 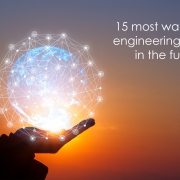 Is AI the last invention humans will do?
0 replies

15 most wanted engineering skills in the future
Scroll to top